Mytilineos S.A. has been announced as the contractor of the project.

Independent Power Transmission Operator announces the successful completion of the tender regarding the reconstruction of Koumoundourou HVC, awarding the relevant contract to Mytilineos S.A., for the project with a total budget of 46 million euros.

The tendering process was completed on December 21 2020 with an electronic auction, where bids were submitted by Mytilineos S.A., TERNA S.A. and ELEKTROMEK S.A. Mytilineos S.A. was declared as the underbidder, at the price of 45,127,164 euros.

The reconstruction of Koumoundourou HVC is a "turk-key" project including the replacement and extension of existing switching devices of 150 kV and 400 kV with a state-of-the-art closed GIS as well as the addition of new power auto transformers and compensation self-inductor. The new HVC will be powering twenty-one 150 kV and four 400 kV transmission lines, carrying a considerable part of the loads within Athens Basin.

The power link of Attica-Crete will also be interconnected to the new facilities of the HVC (via the under-construction Koumoundourou Converter Station) along with the "Eastern Corridor" of Peloponnese (Megalopolis-Corinth-Attica). The project is scheduled to be completed over a period of 30 months.

"This technically challenging project will contribute significantly to the stability of electricity supply in Attica region, 'shielding' the country's capital with regards to its energy demand. Mytilineos S.A. has been a reliable partner of the Operator and we estimate that the HVC's construction will be completed on time, in mid-2023. IPTO, advances its projects according to schedule and despite the adversities of the pandemic, aiming to provide safe, efficient and green electricity to the country." 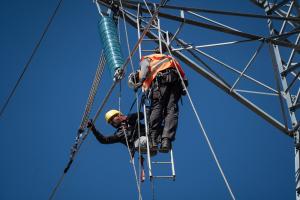