Energy cooperation in the region of Southeast Europe steps up

The Southeast Electricity Network Coordination Center "SEleNe CC" was inaugurated in Thessaloniki, Greece, on Friday September 10, by the Minister of Environment and Energy Mr. Kostas Skrekas and the Secretary General for Energy and Mineral Resources Mrs. Alexandra Sdoukou. The inauguration ceremony took place in the presence of representatives of the Operators-Shareholders of SEleNe CC, as well as the competent regulatory authorities.

SEleNe CC was established in May 2020 and from July 1st, 2021, entered commercial operation with the provision of consulting services to the System Operators of Greece (IPTO), Bulgaria (ESO-EAD), Italy (Terna) and Romania (Transelectrica), towards the coordination and consistent operation of the Transmission Systems of Southeast Europe. Under the framework of EU's Clean Energy Package (CEP), on July 1st 2022 SEleNe CC will be upgraded to a "Regional Coordination Center” (RCC) with increased responsibilities and expanded services.

The Minister of Environment and Energy Mr. Kostas Skrekas, stated: “The launch of operations of the Regional Control Center for Southeast Europe in Thessaloniki, marks the beginning of a new era for energy security and cooperation in the region. It is an important step for the alignment of our area with the European policies for energy transition but also the retention of stability of the power grid, given that more and more RES are added in the European energy mix. The close cooperation of the Operators will allow the maximizing of energy transmission between countries and will reinforce transparency in the European energy market, by means of monitoring energy exchanges in southern Europe. It also strengthens the country’s role as an energy junction and shields the adequacy of the electric power transmission system in the area.”

The Chairman & CEO of IPTO Mr. Manos Manousakis, stated: “Today we celebrate the fruits of the close cooperation between the Operators of the four neighboring countries. After many years of effort we have accomplished our common goal, to establish the sixth and last RSC in the European Union, in the region of SE Europe. The need for energy security at a regional level becomes even more urgent within an environment of increasing RES penetration and the integration of the European electricity market but also because of the climate crisis which creates extreme weather conditions, often causing unforseen incidents in the European electricity system. SEleNe CC promotes energy stability and know-how exchange between neighboring Operators and makes for an important step as regards the alignment of the wider region with the European institutional framework.”

The Chairman & CEO of ESO-EAD Mrs. Angelin Tsachev, said: “Today we officially launch the operations of the Regional Security Coordinator of the transmission operators of the EU member states from the Southeast Europe - SEleNe CC. The past months of record-high temperatures and the need to secure the increased electricity consumption in the region have proven the benefits of the Center for guaranteeing the security of electricity supply. The close cooperation between the transmission system operators, members of the Center is crucial for the successful electricity markets coupling process in Europe and for achieving competitive electricity prices for all consumers. The operations of the Center shall enhance the functioning of the single electricity market in Europe and the integration of the Western Balkans, enable synchronized management of the electricity systems, contribute to improving the exchange of information between the transmission operators and guaranteeing the electricity supply. I wish successful and beneficial operations of the Regional Security Coordinator in future.”

The Head of Grid Development Strategies and Dispatching of Terna Mr. Francesco Del Pizzo, stated: “Terna is delighted that Italy is co-hosting the launch of SEleNe, gathering the best technical competences of system operators from Greece, Romania and Bulgaria to improve secure of supply in the Southeast region. This platform will be key for increasing competition among the electricity producers and to ensure the functioning of the internal energy market, reducing energy prices. The development of renewable generation and increased interconnections make regional coordination among TSOs more important than ever. This collaboration can also be considered as a stepping-stone towards a broader coordination in the Balkan area, providing an important opportunity to build a common overview beyond the national framework of each individual transmission network of this region. SEleNe is a central tenet of the Terna’s Development Plan that foresees over €18 billion in investments for the ecological transition and includes the construction of a new 500 MW and 200 km long undersea cable with Greece, that will encourage greater integration of renewable sources”.

The Regulatory Affairs Director of Transelectrica Mr. Adrian Suta, stated: “The road to a carbon-free society poses unprecedented challenges that all of us need to tackle in order to unlock the huge social benefits of sustainable economic growth. The energy sector is right at the heart of the change. Regional cooperation in the energy sector is a key enabler of the climate objectives Europe is so strongly committed to. By establishing SΕleΝe CC as SEE's coordination center, the region is now ready to deliver more benefits to the electricity market and to society at large. The region has reached a very important milestone on the very challenging road ahead and is now a more prominent landmark on Europe's energy map". 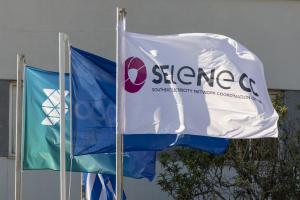 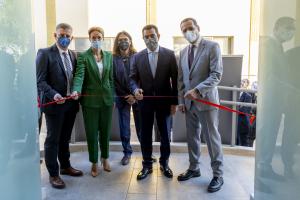 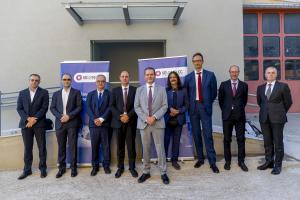