Crete-Attica Interconnection: The installation of the submarine power cables begins

The installation of the submarine power cables of Crete-Attica interconnection is on the starting line, by the subsidiary company of the Independent Electricity Transmission Operator (IPTO), Ariadne Interconnection. The "Aurora" vessel of the contractor company Nexans sailed on its maiden voyage to Attica, marking the beginning of the installation works for the first section of the submarine cable, in the coming period.

The vessel moored in the port of Piraeus and was visited by the Minister of Environment and Energy Mr. Kostas Skrekas, the General Secretary for Energy and Mineral Resources Mrs. Alexandra Sdoukou, the Chairman and CEO of IPTO Mr. Manos Manousakis, as well as by executives of the administrations of the Operator and Ariadne Interconnection.

The political leadership of the Ministry and the administrations of the two companies had the opportunity to visit the state-of-the-art cable-laying vessel Nexans “Aurora” which carries the first 170km of the power cable that will connect Crete to Attica.

The Minister of Environment and Energy Mr. Kostas Skrekas, stated: "Today we visited the vessel Nexans ‘Aurora’ which will lay the submarine cable, with a total length of 670 km, for the electrical interconnection of Crete with mainland Greece. This is the largest project in the history of the Greek electricity system, which, when completed in 2024, will bring multiple benefits for the citizens and the environment. First, it will shield the electricity grid of Crete, ensuring the uninterrupted power supply of the country’s largest island. Second, there will be significant savings in electricity bills of up to 550 million euros on an annual basis from the reduction of the PSOs. Third, it will contribute to achieving national climate targets by drastically reducing CO2 emissions by 450,000 tons a year".

The Chairman & CEO of IPTO Mr. Manos Manousakis, stated, in this regard: “Crete-Attica interconnection is progressing dynamically. Τhe arrival of ‘Aurora’ in Greece, signifies the critical phase of the electrical cables installation that will realize the energy union of Crete with Attica. The submarine cable with a transmission capacity of 1,000 MW and a voltage of 500 kV will significantly expand the margin to transfer clean energy to and from the island, highlighting the crucial role of electrical interconnections in the energy transformation of the country and the accomplishment of national targets regarding energy and climate”. 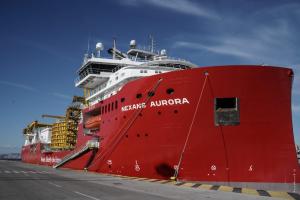 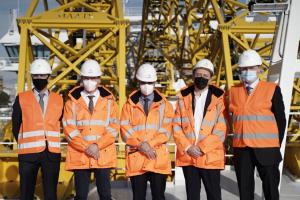 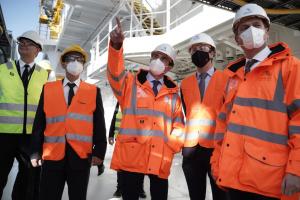 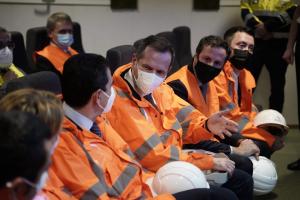